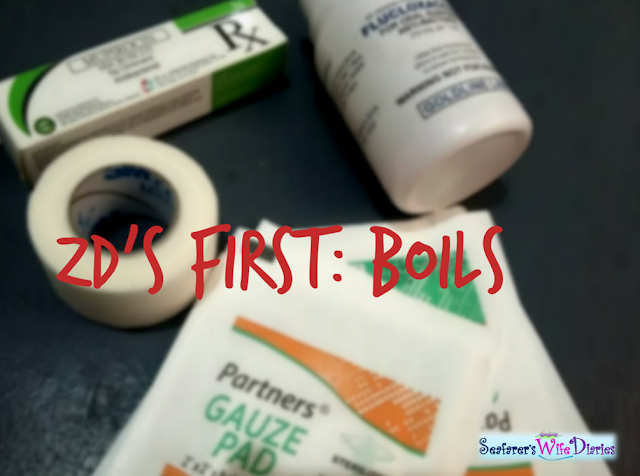 Last Sunday my Zd bear was enjoying our Sunday activities and then in the afternoon he was active playing with the other kids in our church. In the evening while I was taking care of him and feeding him dinner, he was suddenly pointing on his left knee and said "mama, yayay"! (mama, it hurts). I checked his left knee and I saw a small wound it's like a bite of ants and it is flushed around it. I cleaned and put Betadine  and also put hot compress for him to relax and help him to ease the pain. In the morning I noticed that there was pus in his wound and it's watery. In that morning also I felt so dizzy and I almost collapsed while outside. I was not feeling well.

After our breakfast I decided to head in FGH Fairview General Hospital to have our check up. The doctor said to me that my Zd's wound was not a bite from an insects but it's a boil. So he cleaned and removed the pus. I am relieved and after buying all our needs we went home and took a nap and some rest.


In the afternoon I noticed again that the pus from his wound was flowing so I decided to clean it up and Zd has a fever. I gave him a paracetamol Tempra for kids and after a while he fell asleep. In the evening, I tried to asked my friends and church mates if what is the best remedy for boil but I must prefer herbal. So other friends suggested some herbal meds but the other's suggested to bring Zd on his pedia and so that the doctor could give him a medicine and antibiotic for his boil. In the evening I kept thinking what's the right thing would do and praying to God.


In the morning I could see that my son really suffered the pain and can't even walk straight.after lunch so I took him to his pedia and and the doctor cleaned it again and pinisil nya talaga ng pinisil hanggang blood na ang lumabas. My heart was broken again because I can really feel the pain of my son while he was crying. But my heart also was aching because I am so scarred of blood. But I keep trying to be strong for my Zd. After the procedure my strength was exhausted. I have a fear of blood.

Posted by The Seafarer's Wife Diaries at 5:09 AM