"Do not let your hearts be troubled. You believe in God; believe also in me". 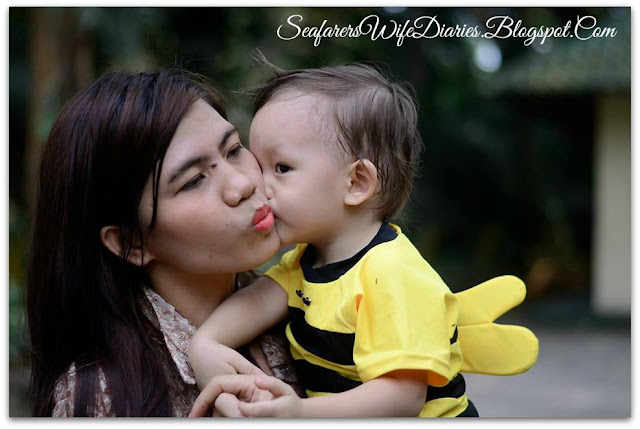 One night, my body wanted to sleep and rest so at 7:00pm my Zd and I were going to sleep. After our night routine, reading Bible story and praying, exchange words ("good night Zd", "good night mama", I love you Zd", I love you mama" and hug each other) I turned the lights off and had a good night sleep.

After eight hours of sound sleeping, at 3:00 am I noticed that my Zd bear keep hugging me and I was not comfortable. I felt that there is something wrong. I woke up and turned on the light, checked my Zd boy and to my surprise, he was chilling and very pale his red lips turned almost white and he had really dark eye bags. I checked his toes and feet, they were all pale!

While looking at my kid I remembered, when Zd experience this the first, my mother would just get the vinegar and put it on his whole body and under arms and after couple of minutes, I think it's about 5-10 minutes lumabas ang init ng katawan ni Zd bear at unti-unting nawala ang panginginig nya.

I thought that experience would not happen to him again, unfortunately, it did. I grabbed Zd boy immediately and got his Paracetamol on my medicine kit, I had no time to check his temperature. But sadly, we didn't have a vinegar! I wrapped Zd boy in a blanket and we went going outside at 3:am running to find vinegar. But I almost cried kasi sarado pa lahat ng tindahan at naalala ko na may tindahan pala na mas malapit samin. I knocked the door without thinking na makadisturbo ako, kasi ang iniisip ko is malagyan agad si Zd ng vinegar. I thanked God when the door opened. Nanay Kareng gave a vinegar and put it on ZD's body, after a few minutes unti unting lumabas ang init ng katawan nya at nawala na ang panginginig nya at unti unti nawala ang pamumutla nya.

After this experience happened, I thank God because He gave me wisdom to stay focused instead of panic. I knew what to do because of His guidance.

If you ask me why why my mother used vinegar before and why it worked? I have no idea. But this is amazing because it's proven and tested. Right now my Zd bear is okay and doing well.


The Word of God says that "Do not let your hearts be troubled. You believe in God;"

Did you experience that your kid is suddenly had convulsion? What did you do?
Thanks mommies for sharing!

Posted by The Seafarer's Wife Diaries at 1:14 AM