Last month I went to Fairview General Hospital for my ear check up because I had some problem with my ears but I was surprised when they checked my blood pressure.They said it's too low and they advised to take a Sangobion to help my blood goback to normal.

Week before I went to the hospital, I noticed I was experiencing dizziness, lack of focus, paleness, and always feeling tired.I always wanted to sleep even right after I take breakfast. These are the common signs of Anemia.

This week I found out the 5 common signs of Anemia and why iron is so important in our health during the event of Sangobion. The event happened in Romulo Cafe Quezon City.

Fatigue and other symptoms of anemia can also lower your quality of life and reduce your ability to concentrate and be productive at work.

Everyone gets tired, feels weak, and becomes restless once in a while. But, for people with anemia, these are more or less what they experience every day. When one suffers from anemia, he or she gets tired easily from working, feels dizzy for no reason, and is generally overcome by fatigue.

Sangobion IRON+ (Ferrous Gluconate+Vitamins & Minerals) has always been serious about fighting iron deficiency anemia.
To accomplish this, Sangobion is launching a new campaign, Sulong Dugong Pinoy, and kicked it off with a media launch held recently. 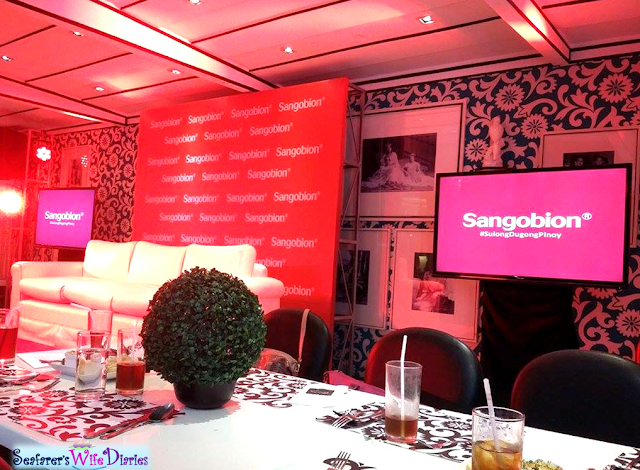 The event featured speakers like the University of Sto. Tomas Hospital’s Department of Obstetrics and Gynecology chairman, Dr. Corazon Zaida N. Gamilla, who discussed the importance of healthy blood in supporting the functions of the body, the prevalence of anemia, its symptoms, and ways to prevent and treat it. Also present was Dr. Christie Monina Nalupta – Director of the Philippine Red Cross - National Blood Services, who graced the event to support Sangobion’s vision of a healthy blood nation.


Meanwhile, it was Ming Arroyo-Cunanan, Marketing Director of Merck (makers of Sangobion IRON+), who focused on the brand’s relevance and big plans.

“We have been helping men and women from across the country fight anemia with Sangobion, and I’m happy to say that we’ve been successful. That’s why we think that now is the time to start elevating the brand’s purpose. It’s more than just treating anemia, it’s about maintaining healthy blood to empower every Filipino. Our vision is a blood-healthy Philippines.” Cunanan said of Sangobion’s plans this year.

The launch’s biggest guest was none other than singer Sarah Geronimo, who has been part of the Sangobion family for two years now. A teaser for the new Sangobion TVC (Watch the teaser on Facebook: http://bit.ly/Teaser1FB  or YouTube: http://bit.ly/Teaser1YT) was also screened for the first time to a public audience, which got everyone even more excited. 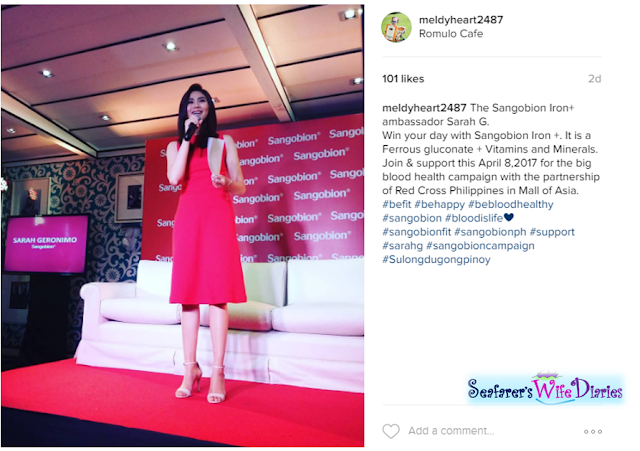 “There really are a lot of amazing things coming for Sangobion.” Sarah enthusiastically told the crowd. “I’m inviting everyone to join us sa Saturday, April 8 po, at the SM Mall of Asia Music Hall for the Sulong Dugong Pinoy Blood Health Event sponsored by Sangobion of course, and supported po ng Philippine Red Cross.” Major activities like the official TVC premiere will take place, all to kickstart the Sangobion Sulong Dugong Pinoy campaign.


#SulongDugongPinoy
Posted by The Seafarer's Wife Diaries at 5:46 PM