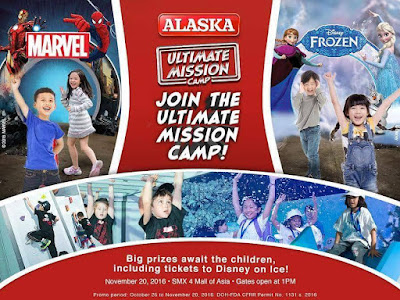 (Manila, Philippines) Following the successful launch of the partnership between Alaska Milk and Disney last April, comes a new adventure and exciting missions for kids and the whole family.
The Alaska Ultimate Mission CampThis November 20, get into a fun-filled adventure at the Alaska Ultimate Mission Camp at the SMX4 Mall of Asia.  Kids, 4-10 years old, are invited to join a one-day activity where they get to accomplish their own Disney Marvel and Frozen missions.
Here, kids can be just as brave and creative as their favorite heroes from Disney’s Marvel and Frozen Universe .The whole-day,  will come with missions that will not only engage the children’s interest, but more importantly will come with educational activities that foster camaraderie among other kid participants.

Each mission zone comes with fun and exciting, at the same time kid-friendly, challenges that will test their speed, creativity, strength and agility. While they’re getting creative with their approach for each challenge, the kids are also boosting their self-esteem on the things that they can accomplish on their own.
Meanwhile, parents and guardians, can also get a dose of the fun with the array of activities especially designed for them. There are stage performances for their enjoyment, as well as cooking demonstrations, much to the delight of parents thinking of more ways to spice up family meals and kids’ baon.
This makes the Alaska Ultimate Mission Camp truly the ultimate event for the whole family, filled with enjoyment and learning. It is Alaska’s way of bringing a new level of excitement to Alaska Ready-to-Drink (RTD) Milk drinkers.
The country’s popular mommy bloggers will partake in uncovering their very own Disney missions together with their kids. Frances Sales of Topaz Horizon will be joined by her son Vito, Misty Mom’s Shari Macainag with her online darling Selene, The Peach Kitchen’s Peachy Adarne and daughter Purple Skye and Momma ‘n Manila’s Michelle Aventajado with her daughter Gelli. Their experiences will be documented live by no less than their kids themselves through their moms’ social media accounts – taking the mom-and-kid bonding moment to an all-new level.
Alaska Milk Corporation and Disney PartnershipAlaska Milk Corporation’s mission to nourish and develop kids’ mind and body by encouraging healthy milk drinking habits, is made more fun by the partnership with Disney and its power to create happy and magical moments for kids and families.
The partnership started in April 2016 with the launch of the “Who will you be today?” campaign.  It introduced Alaska Ready To Drink milk for kids in  Disney Frozen and Marvel Superheroes  packaging designs for Alaska Choco, Alaska Sweet Milk, and Alaska Yoghurt Drinks.
Alaska has always been an advocate of healthy child development, as seen in its strong efforts to promote and ensure that every child gets proper nutrition. It makes sure that every pack of Alaska such as the Choco and Sweet Milk contains essential vitamins and nutrients that support kids’ active lifestyle. While the Alaska Yoghurt Drink promotes proper digestion as it contains naturally fermented good bacteria.
Now, these Alaska Ready To Drink Milk for kids come in Disney Frozen and Marvel packaging designs, with cut-out options to also encourage play among kids, on top of drinking healthy milk drinks.
Alaska Ready To Drink Milks for Kids in new Disney and Marvel is available in all leading grocery stores and supermarkets nationwide. Alaska Ready to Drink milk has 4 flavors: Alaska Choco, Alaska Sweet Milk, and Alaska Yoghurt Drinks.
###
About Alaska Milk Corporation: For more details you can visit www.alaskamilk.com, and Like Alaska Fresh Milk on Facebook.
About The Walt Disney Company in Southeast Asia (NYSE:DIS) - The Walt Disney Company has been active in Southeast Asia since 1995 when Disney Channel first launched in Malaysia and has grown to five offices in the region (Philippines, Malaysia, Thailand, Indonesia and Vietnam) with the headquarters in Singapore, employing over 300 permanent staff. Disney is one of the most active and largest global entertainment companies in the region with diversified businesses in film, consumer products, publishing, mobile content, television and family entertainment overseeing content from six key brands: Disney, Pixar, Marvel, ESPN, ABC and Lucasfilm.

Posted by The Seafarer's Wife Diaries at 11:06 PM